In This Is The Police, the Freeburg Police Department (FPD) is the primarily police force in the city of Freeburg and holds several responsibilities starting from traffic enforcement to counter-terrorism. From the normal duties such as Police and Detective, the FPD also employs an elite force, the special weapons and tactics for serious and life-threatening situations.

Its current chief of the police is Jack Boyd and the initial deputy was Francis Kendrick but after his resignation, Martin Stett became his next successor as Deputy of the Police.

The police department is composed of four major components: Officers, detectives, a Special Weapons and Tactics team and a paddy wagon.

Officers can be sent out on calls and for missions (issued by various factions across the city) with their patrol cars.

The SWAT team can be to support the officers and detectives on their missions to increase their chance of success. They can initially only mobilize once a day. However, they can be upgraded through requests at city hall, allowing them to mobilize up to 4 times per day and greatly enhance their efficiency.

The Paddy Wagon is used to support the officers when there are a large group of people that needs to be arrested and transported.

All SWAT members are equipped with Bullet resistant vests with plate carriers. They wear black tactical helmets and masks. 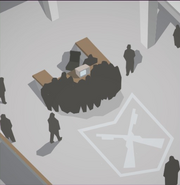 Although ranks are not stated it is believed that the system goes along these lines:

Retrieved from "https://this-is-the-police.fandom.com/wiki/Freeburg_Police_Department?oldid=5200"
Community content is available under CC-BY-SA unless otherwise noted.